We had a fun and productive trail day on June 2nd. We addressed all the major stream crossings on Hydra, and also completed the last of the Spring cleanup.

About 12 people met at the parking lot on Murray Hill Rd, arriving by car, truck, bicycle and motorcycle. After a champion's breakfast of doughnuts and coffee (thanks to Grant), everyone felt they need to burn up some energy. Luckily, I had a very heavy, pre-built bridge in the parking lot that needed to be carried about a mile into the woods. We stacked some tools on top of the bridge, each found a place to grab hold of it and headed off.

About half way to our destination, everyone's hands and arms were starting to go numb and mutiny was immanent. Once again, we were in luck. We had just reached the junction of Bear Claw and Hydra, where a wet spot was in need of some rock armoring. Collecting, carrying and placing rocks got the blood moving again in everyone's arms. Before we knew it was had dealt with the first wet ravine and were ready to move on with the bridge. 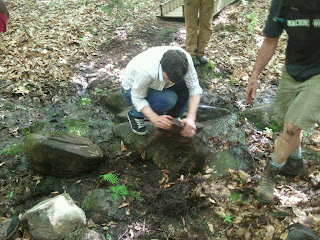 Without much struggle we made it to the 2nd ravine with the bridge. We collected stone to build a foundation for it. Since there was a good supply of stone nearby and the bridge was a little shorter than the wet area, we built up a stone and dirt causeway on either end of the bridge. 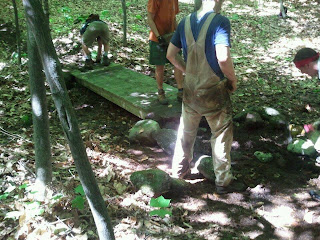 Unburdened by the pre-built bridge, we skipped, frolicked and cartwheeled our way to the next wet spot. We stopped briefly at the third ravine to admire our handiwork from last year and take this photo: 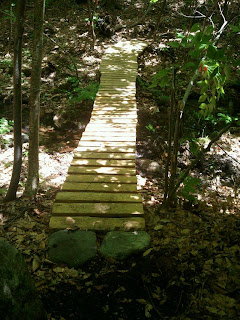 The fourth ravine has a narrow, well defined crossing. We had hauled the lumber for this bridge out at the end of last year. These advantages meant that our well-seasoned bridging crew was able to knock this task out in minutes. 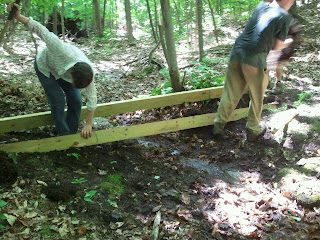 The corner leading into this bridge looked like it could get a little tight at speed, so we decided to expand the width at one end to round it out. 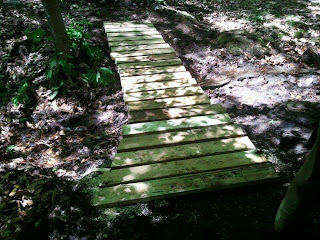 We had just enough time, energy and material to build one more bridge that day, out near the junction with Access Rd. The last bridge was quite shy and refused to have its photograph taken. If you'd like to see it then you'll need to ride out there in person.

The only thing that this trail needs now is YOUR tires to get out there and bed it in. See you on the trail!