I know, I know. You are saying to yourself, how is that even possible?...those guys built it so perfectly the first time.  But there is always room for improvement and Sunday a smaller but elite crew of trail warriors got to making the runout from Mighty Chicken that much faster and more fun. 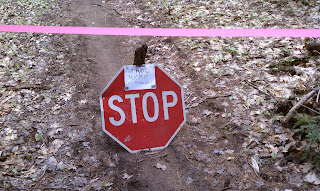 we were thinking about going with "In the name of love" but went with "Trail work in Progress" instead.

Projects for the day were digging out the hump just after the first drop, so that it is actually a bit more 'dropable' for the brave and a much smoother transition for the not so brave. 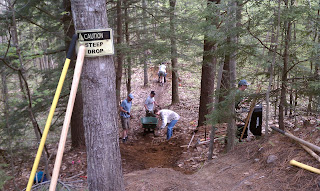 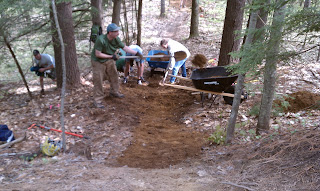 Next order of business was taking some of that dirt we removed to build a berm and another nice little launch for the brave heading into the next little drop, as well as smoothing the transition a bit heading into the final turn. 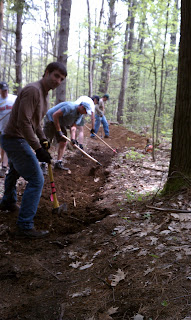 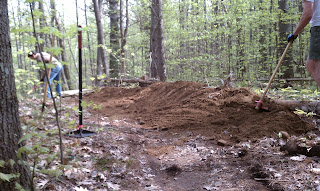 And last but not least was a super berm in the final corner before exiting onto Beltline Rd. followed by a little table top. 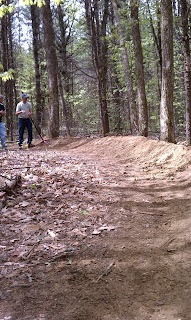 This is just the first half, it wraps around the entire turn 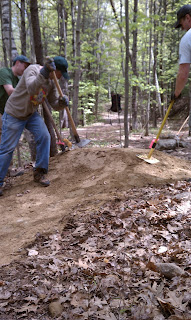 We had some great soil/clay to work with and we are hoping that it beds in real well and lasts for years to come.  But the most important thing it needs now is wheels!  So get out there and get on this stuff.  Let us know how it rides so we can makes tweaks if necessary. 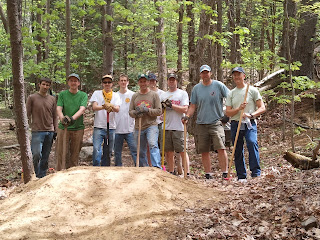 And now that we have this modified run out I bet we can squeeze out another few seconds in the Strava KOM battle and I'm probably going to have to update my tribute video for accuracy and posterity and such.