We had Adam, Andy, Chris, Hugh and Jesse show up for the 5/27 ride.
The first 30 minutes was a fun, winding climb to the top of the Pinnacle full of bridges, roots and rocks via Lower Loop, Trapper, Roots, Tower Circle, Summer St., and Whip N Spur . We took a few seconds to check out the view, then were driven off by the mosquitoes.
Next there was a quick, ripping descent down an unnamed connector to Pine Link. Next, we picked our way along at constant elevation over the rock armoring and outcroppings to the base of Salem's Lot.
The next 30 minutes were spent climbing Coit via the Avery trail (unmapped trail up the SE side of Coit). The climb features off-camber rock outcropping, some rolling benchcut and plenty of Hey-OH. The only way I can do this climb is in the middle ring with legs & lungs burning. It is just to technical for sit-n-spin in the granny. Adam's 32-22 SS gearing is justified by this climb.
More mosquitoes at the top of Coit kept us from stopping for very long, so we continued to Coit Summit (Coit North) Trail for the descent. We would spend the better part of the next hour descending.
About half way down the Coit North trail we took a left onto Coit Bypass (also unmapped). That brought us back around to the midpoint of the Avery trail, where we could enjoy the fun off-camber rock in again in the down hill direction.
We got back onto Salem's Lot, where I completely blew it on the berms. I think I ride them worse every time. Maybe I need a pump track at my house. I'm pretty sure my wife was getting bored with the standard lawn and garden stuff anyway.
We rode out Salem's lot across some more killer rock armoring, then crossed summer street onto another unmapped connector to get to Grenville's Eastside. Eastside may be my favorite trail in the state. It is about a mile of flowy but rocky, rolling bench cut, sweeping berms, quick chicanes, and general MTB goodness. The Hey-OH factor was well off the charts... until Hugh pinch flatted. While Hugh fixed his tire the rest of the group continued to the "Play Ground" where we goofed off for a few minutes before riding the second half of Eastside.
We needed a quick break from all the rippin' downhill, so we did a quick climb up Barton Woods to finish descending by Big Rock, Ledge, Foliage, Ridge, Lower Loop, Trapper, South Boundary, and Forest.
After the ride we destroyed some pizza and beer. Driving home, I was really struggling to stay awake at the wheel while the ride-pizza-beer coma was setting in, but I made it.
Climbing, flowy descents, slow picky technical sections, rock roll-offs... The Pinnacle Delivers!
Posted by Jesse McGowan at 8:31 AM 1 comment:

Jesse was jonesin' for the data. So here it is...

Good group, nice pace. Trails were nice and dry and a few of the trouble spots have gotten armored since the last time I was there. It's nice having local riders who know how to get things done isn't it?
Posted by Kevin at 9:09 PM No comments:

We are considering the Pinnacle in Newport, NH for the 5/27 ride.
Does this location work for anyone? I can assure you that this place is worth the drive!
We'll do a about 1200ft of climbing so you'll wanna bring your legs & lungs, but we'll keep a moderate pace.
Posted by Jesse McGowan at 10:14 AM 5 comments:

Hey Matt don't worry you didn't miss much last night.  We got lost a bunch and the bugs were really bad.  We basically had no fun at all.  You probably shouldn't even really read any more of this post it was so bad.


No really stop reading now and browse elsewhere, this post could be hazardous to your recovery.


Ok now that Matt is gone, the ride was awesome! I am finally starting to get a mental picture of the layout of this system and I am starting to recognize trail intersections when I hit them and I guessed correct directions a few times so I think I am well on my way to having this place figured out. And I am pretty pumped about that because I am really starting to like the sustained technical riding here.

To date I hadn't really been able to link up a loop that flowed well. But with the collective help of Scott, Hugh, Adam, Jesse and Chris we got a great 6.6 miles with all kinds of great techy bits without the standard get lost for 10 minutes and bushwhack a bit that I'm used to there

Another great ride, stay tuned for updates about next weeks ride location!
Posted by Kevin at 8:35 AM 11 comments:

For those that missed it our group ride season got off to a great start last night at Franklin Falls.  Great temps and a perfect breeze that kept all the bugs at bay.  Many of us got our first stab at the Salmon Brook Trail as well.  Still needs a bit of work but in my opinion it is a success and a nice addition to the trails at FFD.

Just a note: Please be mindful of the wet spots on Salmon Brook until we have a chance to armor them, we don't want to do too much damage.


All in all a great ride, a few of us are still working out the winter kinks though.  Matt got bit by the Pine Snake and I pulled a flying Dutchman on Moose Gulley.  We even had a broken derailleur hanger but luckily a spare was at hand and between a few multitools we were able to get it installed.  Should be a great season.  Next week we are off to Concord! check the Upcoming Events for details and directions soon.
Posted by Kevin at 8:05 AM 1 comment:

We had a great showing this morning and we are glad we did because today's plan was not for the weak of heart.  A lot of manpower was needed to execute what we had in mind and everyone came through beautifully.  Lots of bench cutting, armoring, heaving and ho'ing.  But with our crew of 25+ we were able to completely rough in a new trail in about 4-5 hours.

The SBT starts off Rusty Bucket and makes its way down to Salmon Brook via several switchbacks.  It then loops back and eventually intersects with the Heritage trail down on the north end of FFD by Lost Wall, etc.  We were able to incorporate some interesting features and even some rocks for once (we know, rocks at FFD?! who'd have thought??)

There is still some work to be done, a few moist spots need some additional armoring and we will continue to refine the bench cutting and switchbacks as they ride in and we figure out the optimum lines but for the most part it was a highly successful day, one of the biggest undertakings at FFD to date.  But enough talk, to the pics! 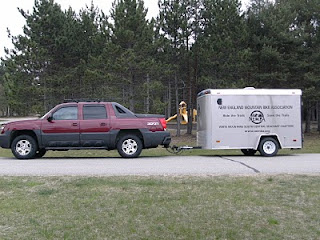 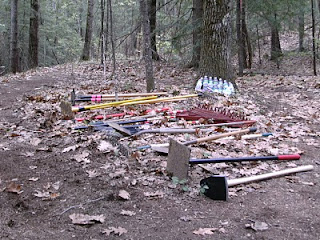 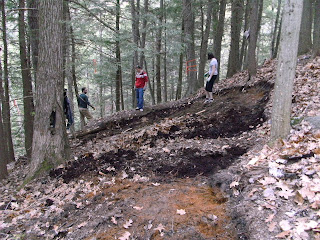 A switchback is born... 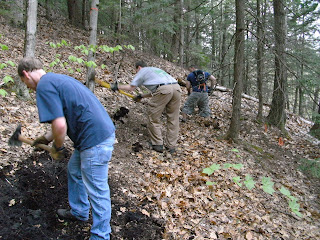 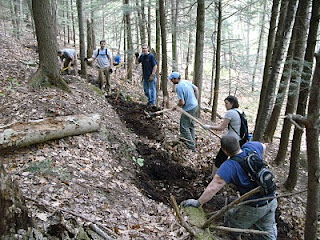 we weren't kidding about the benching, there really was a lot of it 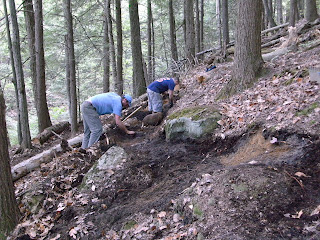 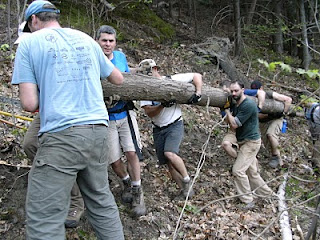 this is where is started getting really serious 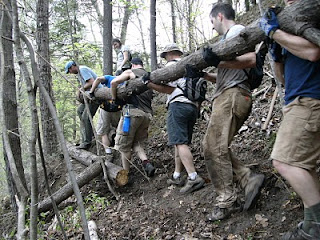 be sure to thank these guys while riding across this slope 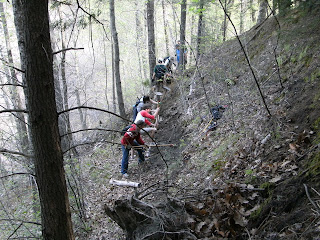 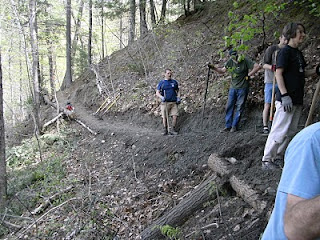 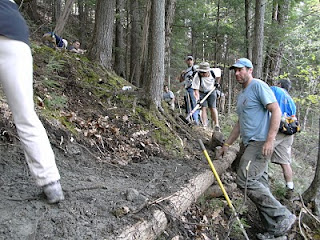 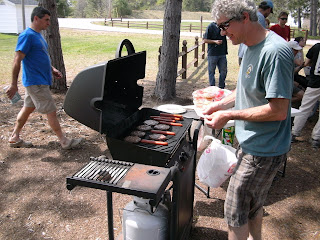 then I realized how hungry I was 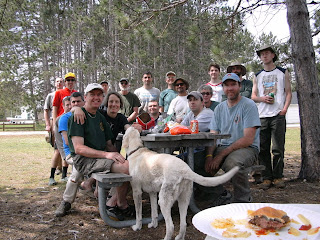 A few of the crew snuck off early but this is just about everyone, including the pooch and a delicious burger in the foreground (I took a photography class once)
Thanks again to everyone for coming out, we would have never accomplished this without you!  We will probably be trying to schedule a few impromptu work days to continue armoring and addressing some of the other finishing touches for the SBT so keep your eyes peeled here for updates.  Also be on the lookout for our Thursday night group rides which will be starting this week.  First night will be right here at FFD.
Posted by Kevin at 8:55 PM 6 comments: